It’s always nice to see the hard work of me and my pupils paying off, be that in the form of wins and titles or just simply lower scores. So it’s great for me when these improvements are recognised and appreciated by my pupils…

If you would like to share your personal experiences and achievements after working with Solid Golf then please send in your comments via text, email or you can use the form on this page. 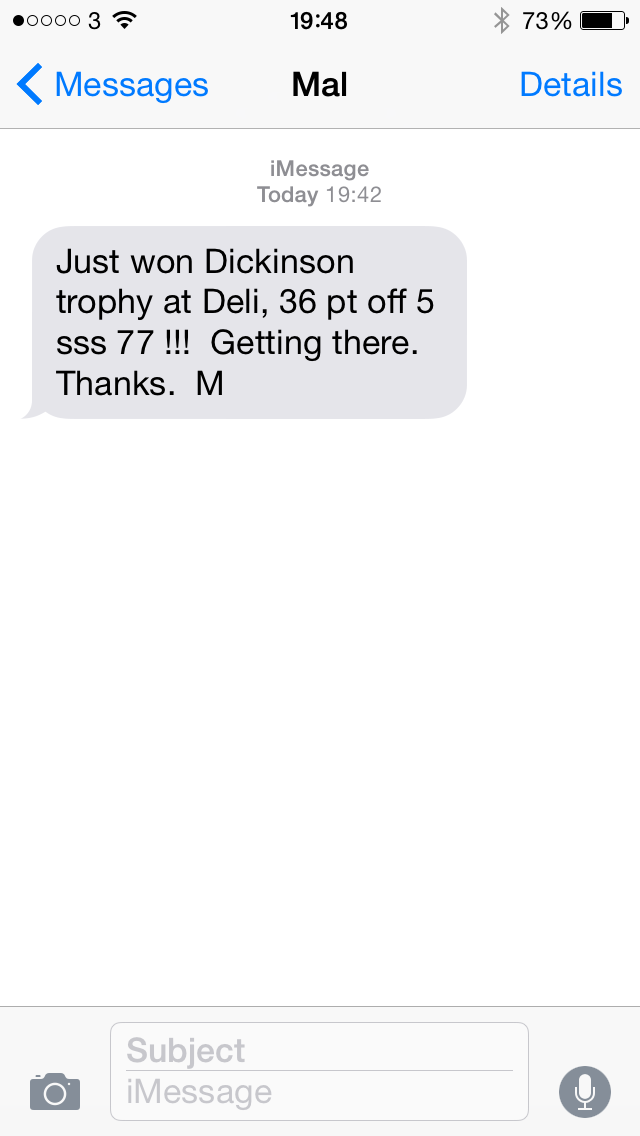 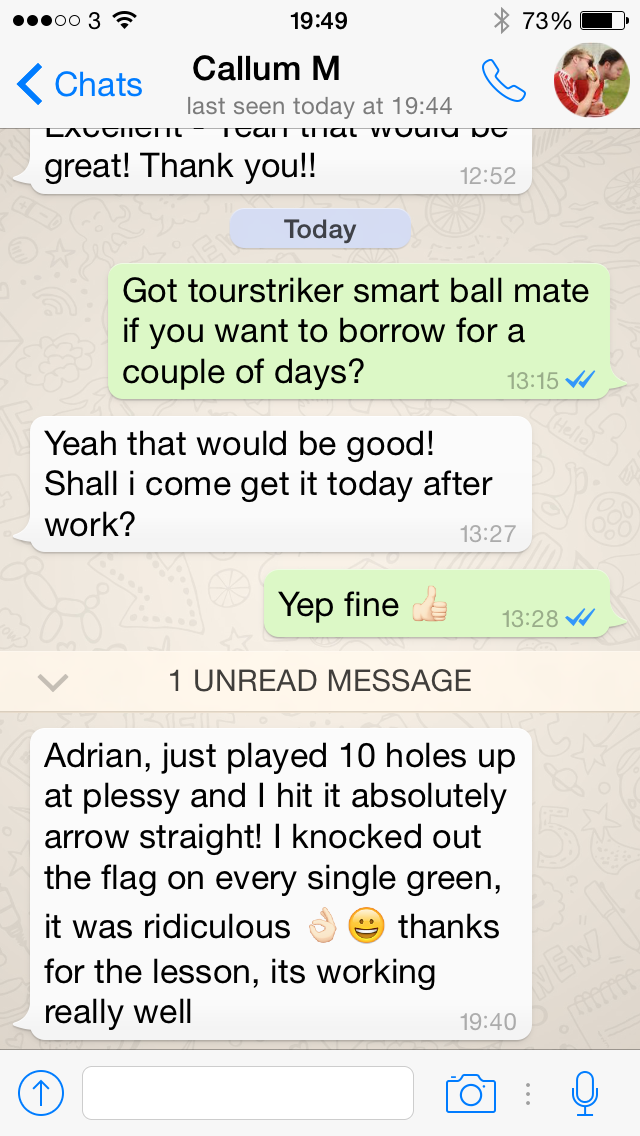 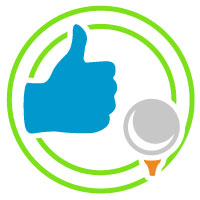 Submit Your Own Testimonial

After the horror of Lord’s, I’m sure the last thing any English sporting fans wish to read about is more Australian sporting success on home soil. But Scott Arnold, a 29 year old from down under, this morning carded a highly impressive round of 66 to finish his first ever Major tournament at a competitive five under par.

But before you give up on sport altogether, Arnold revealed in his greenside interview that he yesterday received help from a UK coach, who fine tuned his previously wayward putting. “Adrian Fryer is a guy from the UK that I went to see and he last night gave me some little tips,” he said. “We went out on the putting green and he just saw a few things in my alignment, and his helped worked a treat for me today.” Fryer: clearly the British golfing equivalent to Trevor Bayliss. Only successful.

Arnold also revealed that he would be unable to cheer on compatriot Jason Day, who is currently tied for the lead on twelve under. “I would love to stay and support him but we have got our flight back booked for today as I am in France tomorrow. I am sure that if he plays like you know he can, than he can get it done.” 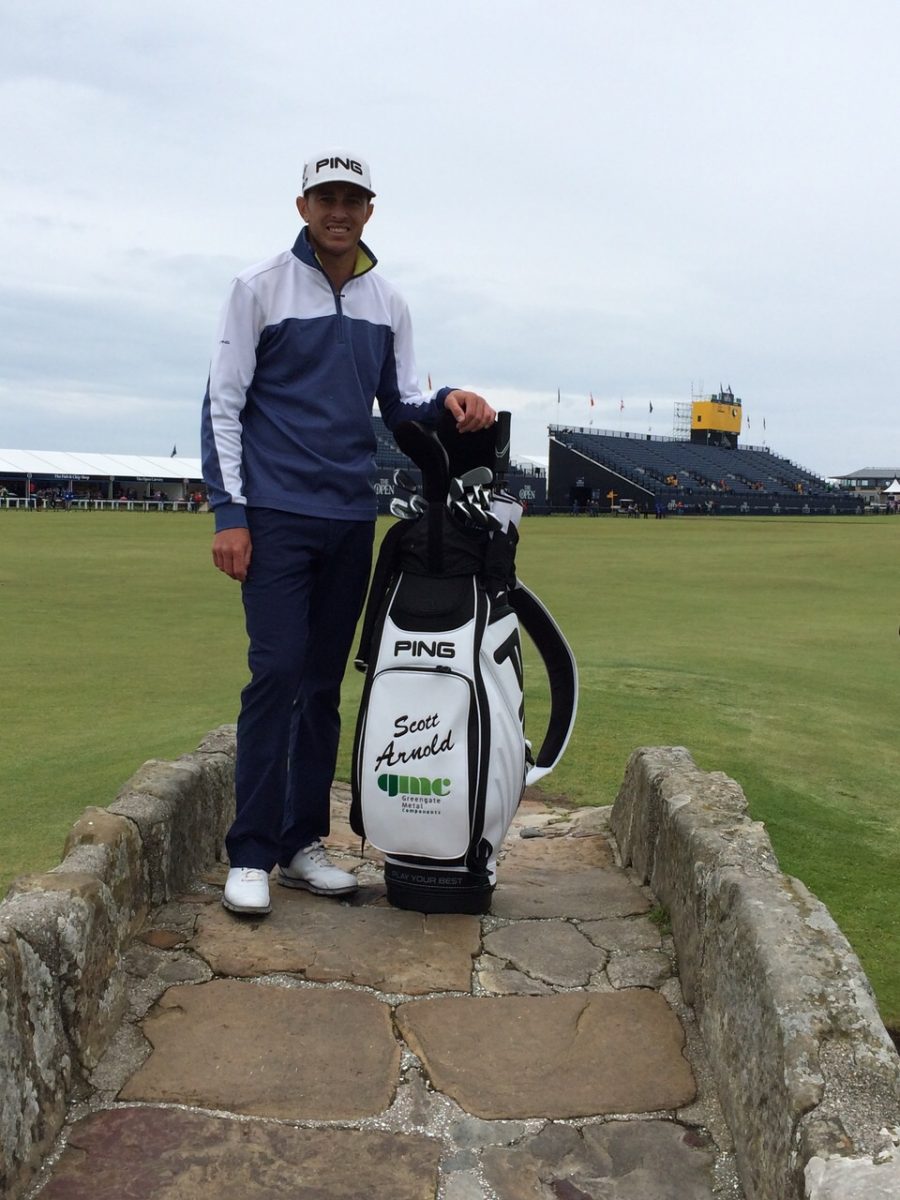 “In the course of my work I come across an awful lot of golf coaches, some good, some excellent, a lot that are frankly very poor however it is rare that I would consider somebody truly OUTSTANDING. Adrian Fryer falls into that category. His knowledge base is second to none, his willingness to learn, his courage in sharing information give me absolutely no hesitation in recommending his services. If you want to improve your game whatever your level, do yourself a favour pick up the phone and see if you can book some time with him NOW. You will consider it the best thing that you have ever done for your game”

“Adrian Fryer is incredibly knowledgeable about the golf swing and playing good golf because he’s very passionate about what he does. He enjoys helping people play their best golf and he’s always trying to improve his ability to help others.

It doesn’t seem to matter whether you’re a novice, club player, national champion or Professional Tour player like me, he’s going to do everything possible to help you succeed.

Since I was 12 years old he’s taught me technique that can work for anyone based on some sound and simple principles.

I suppose over 30 years of experience have allowed him to create a skill or ‘gift’ for showing a person how to do and what is most effective for them. I know I have certainly benefited from his golf wisdom and you can too. “ 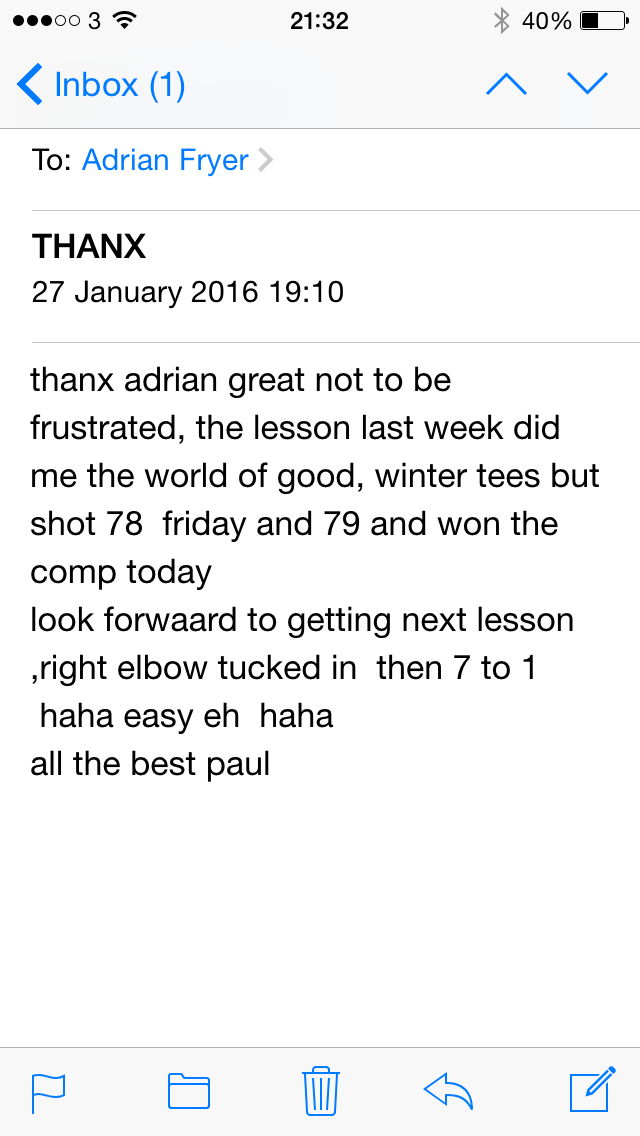 “In the three years I worked with Adrian on Today’s Golfer magazine, he delivered a stream of clear, interesting and useful instruction features. His contribution to TG – based on a sound understanding of the game improvement needs of club golfers and terrific communication skills – played no small part in helping the magazine achieve record sales.” 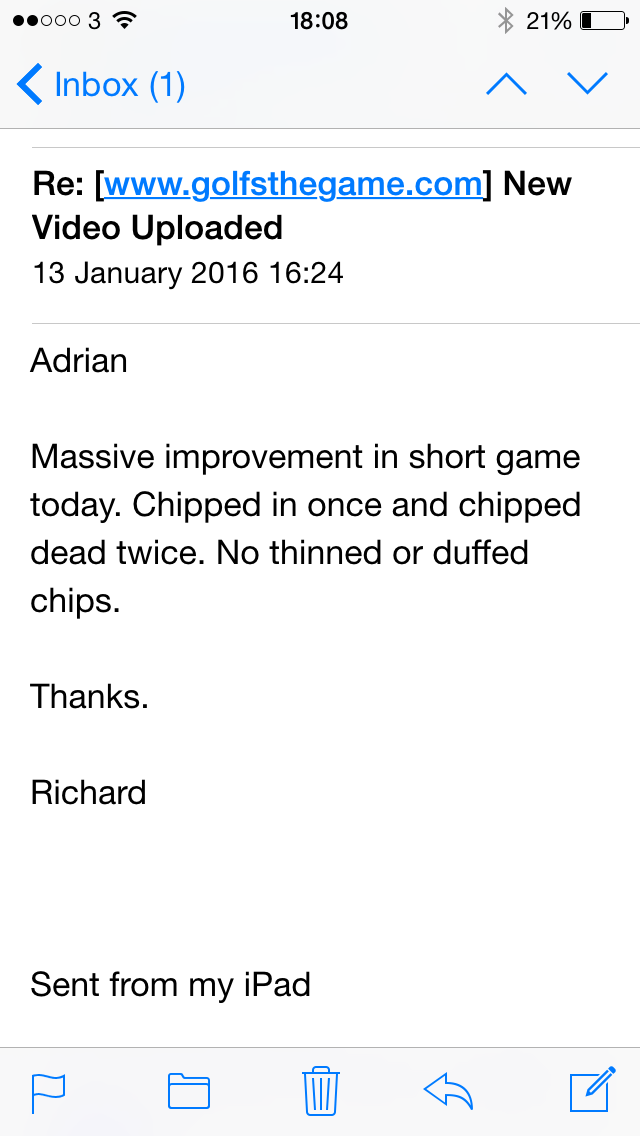 “Having not enjoyed playing golf for a numbers of years I was actually considering quitting having seen various coaches who could only help me to some degree or another. However I have now found Adrian to be a welcome breath of fresh air. He has helped me with both my physical and mental approach to the game, he provides you with just the right amount of information at each session in order help build your confidence in practice ready to take onto the course. I am now winning competitions, regularly reducing my handicap and best of all enjoying the game thoroughly. Thanks again Adrian.

ps. goods news won 2 trophies in past 4 weeks (not won any since 2006) and 2nd in summer league – really enjoying things.”

“I want to thank you for a most satisfying and enjoyable golf lesson yesterday.Never before have I experienced instant success from a tuition session of any description. I was able to carry out the routine you gave me with remarkable success in my game today and came away with the roll up winners cash. Your approach to and execution of golf tuition is excellent and I hope you get as much satisfaction and pleasure from it as I’m sure all your clients do.” 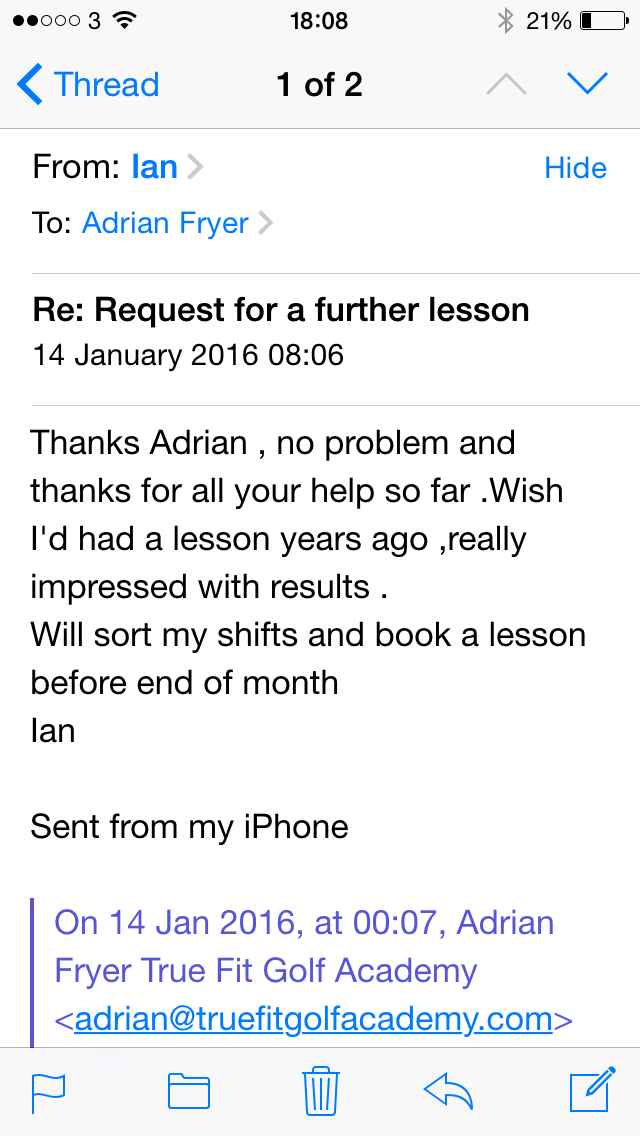 “Thanks for your help Adrian you’ve took me from the point of despair to jubilation, I remember the first time I came to you when I didn’t know what the hell I was doing with the club or with myself. Sometimes it’s good for me to look back at the times I was struggling and remember how far I’ve come…..”

“Adrian, I think one of your biggest attributes that I admire the most and respect is that you are always willing to learn yourself, going out of your way to see how other coaches view the game and how their minds work. Some teachers are not willing to do that. You have a mind full of extremely useful knowledge and it’s ever growing!!” 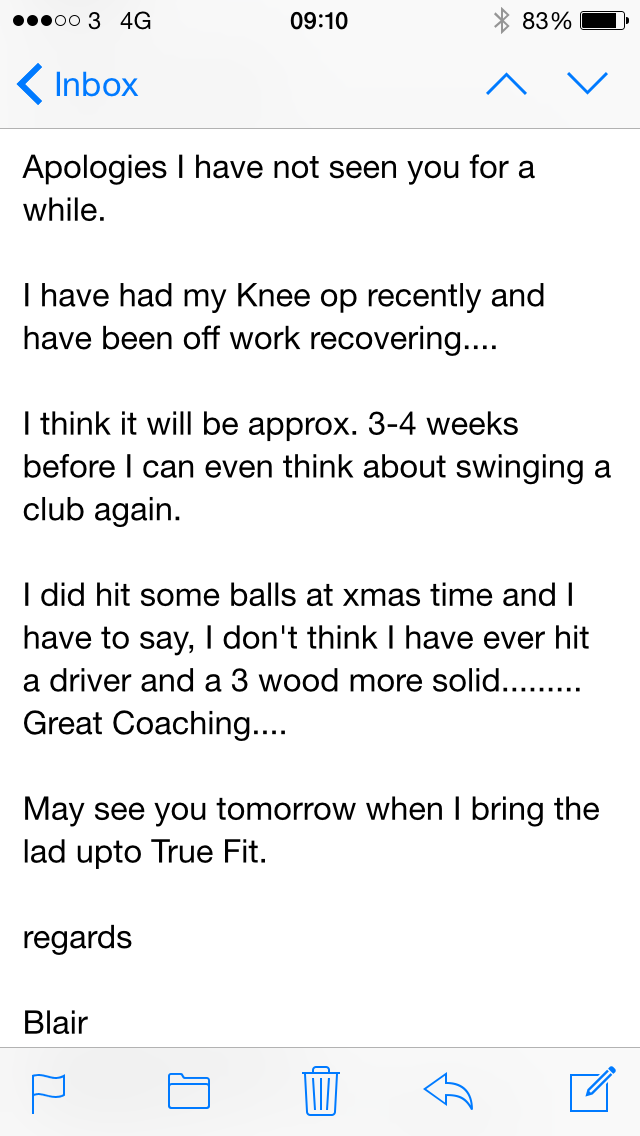 “Just a quick note to express my appreciation of your Short Game course which I recently attended at Portal. As well as giving me a much better appreciation of the thought processes associated with the short game the two “instant fixes” which you identified, one associated with putting and one with chipping, resulted in an immediate improvement in my scoring on the course.
Many thanks.” 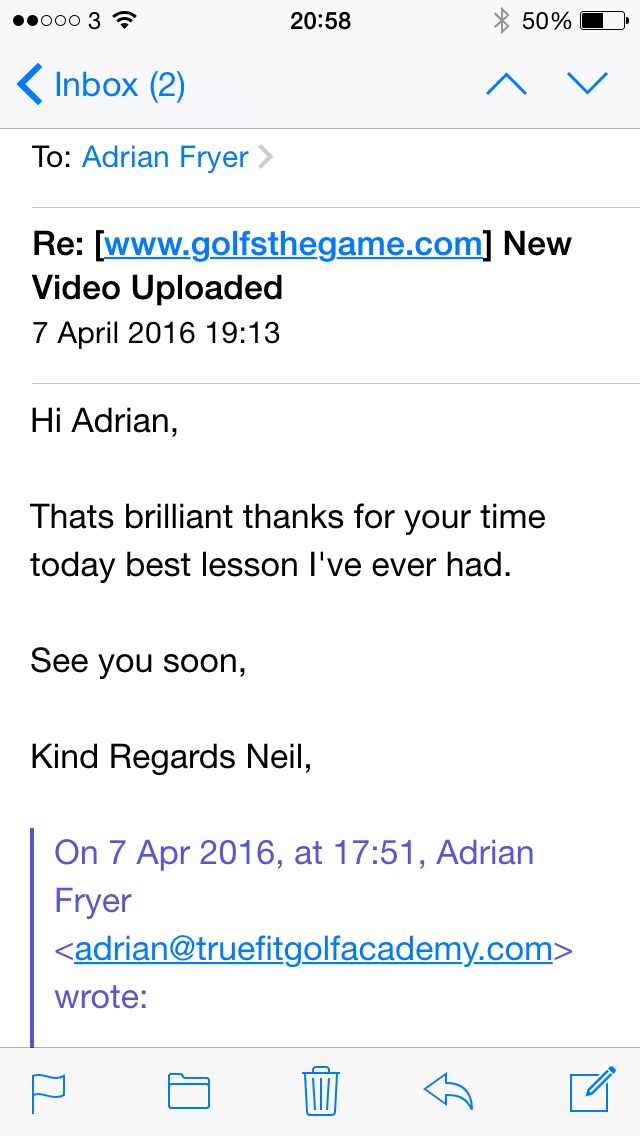 “Adrian is incredibly knowledgable.  He has mastered the art of absorbing the overwhelming mechanics of the golf swing and translating it into simple language that anyone can understand.  He has totally transformed my ball striking and mental approach to the swing.  If you ask him a question, he has the answer and countless, simple drills for every single fault possible in the swing/game.  I wish I had met him 10 years ago!”

“I have been working with Adrian for several years now  and what was evident from the offset  was his genuine passion for coaching the game of golf . He has has provided me with a technique I can trust, whilst at the same time keeping it simple! “

“Played today in a Tournament, best I’ve hit the ball for years. Thanks for yesterdays lesson mate.”

“I used to go to several different coaches for different departments of the game, but Adrian has taught me improved techniques from the mental side of the game right through all the shots required to compete at a
top level.”

“Just letting you know the lesson seemed to work well this week, I shot 5 under on wednesday in the liverpool alliance and won and shot 2 under in the players tour at St Annes on friday and finished T3 overall!”